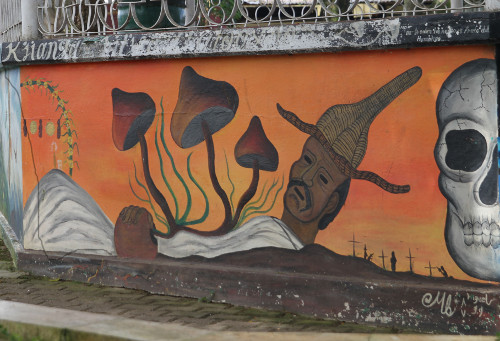 Looking out the window of our bus as it crawled along the narrow winding roads towards the small city of Huautla de Jimenez, I pondered on my own long, winding road that was finally taking me to this remote town after more than thirty years. Needless to say, I had big hopes, but what would occur there would sail beyond my wildest dreams.
Nestled in the Sierra Mazateca mountains of Oaxaca, Mexico, Huautla is the spiritual capital of the Mazatec Indians or, as they call themselves, the Ha Xuta Enima (Humble People Who Speak The Language).
When an attempt to sell our home had fallen through we had decided to go to Mexico for the Day of the Dead, a lifelong dream for my wife and ApetebÃ­, Lisa ChangÃ³. She then suggested we might go to Huautla and fulfill both our dreams at the same time. And during my daily consultations, IfÃ¡ had told us repeatedly that a trip was going to bring us a great good fortune and that there was still something we needed to accomplish in order to move forward and to achieve our destiny. We naturally thought it likely that IfÃ¡ was telling us we needed a little time away in order to give us a fresh outlook and provide us with the answer.
We got in to Huautla on Oct. 30th and the Days of the Dead, which last ten days there, were already in full swing. Josefina, the owner of the hotel we stayed at, was extremely generous and not only said she would help us find an able Chota Chjine (Woman or Man of Knowledge) but introduced us to one of the local Huehuenton groups who represent the dead, going from house to house, singing, dancing, playing music (and exquisite pranks). With Josefina’s gracious help we were get glimpses outsiders rarely get to encounter. It was an incredible experience and I found found myself very glad that I had taken the trouble to learn a little of the Mazatec language as even that small gesture of respect made them more open to us.

After the ceremonies for the dead were complete, Josefina put us into contact with a woman who said could act as our â€˜guideâ€™ in a shamanic ceremony. But when we told her we had come from Los Angeles, she informed us she could not help us. It turned out the Ndi Xti Santo (Little Saint Children) had told her that some people were going to come from Los Angeles. She was not to perform the ceremony herself, but was to turn us over to her elders. The Little Saint Children had known we were coming and had plans for us…
Our Guide offered to refer us to the person she learned from, but that too fell through. But again Josefina came to our rescue and generously offered to seek out a true Chota Chjine or Woman of Knowledge, an old Mazatec woman who lived outside of town in a tiny village in the the woods.

To our great good fortune, the Chota Chjine agreed to perform the ceremony for us. Josefina warned us that she spoke only a little Spanish but was confident the Santitos would make sure we understood despite any language barriers.
That evening we set out over miles of dirt road, winding through the forest past waterfalls and through woods filled with clouds. When we finally arrived and met the old woman and her family, we knew immediately that we found the right woman. They lived in an old structure, much as the Mazatecs had lived for hundreds, if not thousands of years with but a few concessions to the modern world. Though conditions were ‘primitive’ the place felt more like ‘home’ than any place I had ever been. We had never really experienced anyone who lived so connected with the nature around them.
To make a long story short, or at least a little less long, as the night wore on, it became obvious to the Chota Chjine and myself that the Little Saints had chosen Lisa and I. The Little Saints told us we had a lot of work to do and the night was largely dedicated to teaching us what we needed to know to start us on our way to become chota chjines ourselves. Towards the end of the ceremony, the Chota Chjine began to sob: both she and the Little Saint Children were terribly sad as the old traditions were being lost. I pointed out that as long as one person kept the traditions, they would survive. At that point I promised myself as well as her and the Little Saint Children I would do everything in my power to learn the traditions and keep them well and intact. It was the least I could do to show my gratefulness for the immense spiritual treasures and riches they were offering us.
â€œGracias, Gracias Frain (Frank), Gracias LizabÃ©t (Elizabeth)â€
She then informed us the session was a ceremony of conocimiento (knowledge) and not just a regular ceremony, and the â€˜dietâ€™ (restrictions prohibiting the giving or accepting of gifts and sexual relations) would not last the usual 4 days, but was now extended to 53 days.
Needless to say, we have a lot of work in front of us and I now must learn much more of the â€˜maternal languageâ€™ (Mazteco) as well in order to honor the faith put in us by the Ndi Xti Santo (The Little Saint Children) and the chota chjine, our new teachersâ€¦
That evening we felt truly connected to nature for the first time in our lives.
But as we headed towards the city of Oaxaca we had little idea the effects that evening would have on us, or how quickly we would find out just how profoundly we had already been changed…