Having dealt with two major natural disasters in only a span of a week leaves one thinking of one’s vulnerability and survival. The wrath of mother nature has came with such force that it has shaken people to their core. With Hurricanes wiping out entire Caribbean Islands, and Earthquakes toppling buildings in Mexico with buried lives underneath, one has to question why? There will never be simple answers to such a complicated and difficult situation. As my family and I were scraped by both Hurricane Irma and the 8.1 Earthquake in Mexico in the same week we are still in recovery and frankly once one experiences such events it is difficult to ever go back to normal.

We left Florida for Mexico when Hurricane Irma was on top of the Islands with no clear trajectory where in Florida it will make landfall, but all of Florida was on alert. We considered it a blessing that we had made plans a month before to go to Oaxaca for an Indigenous spiritual ceremony. We boarded up our house as best we could, secured outdoor furniture and breathed a hail Mary. There was already some frenetic-ism from people as stores were out of water, food was low and gas stations were depleted. Since we would be away for a week I erroneously thought that it would blow over by the time we returned home. After an arduous 20 hours of travel to reach the remote mountains of Oaxaca, we traveled by bus overnight arriving at dawn the next morning. Our first night in Oaxaca, I was awakened by shaking, and in my deep slumber from exhaustion I thought my body was shaking from the coldness of the mountains. That is, until I realized that the whole house was shaking, and that in the mountains of Oaxaca people, build houses perched on the sides of the mountain with sheer 100 foot drops. I could barely rouse my kids to cover as my shrieks of alarm did little as their exhaustion was palpable.

That was the beginning of many sleepless nights, but mostly of a series of natural disasters befalling like dominoes. Mexico has been rocked by 2 major Earthquakes and 3 major Hurricanes have made landfall in the U.S. and the Caribbean Islands all within a span of a month. Our home in Florida did receive damage from a fallen tree on our roof, and we had come home to no power, no food or water and the stores were still depleted in the aftermath of Irma. We tried to pick up the pieces at home as best we could but many times I noticed I walked purposeless and would awaken from a zombie like state. Definitely, I had spent too many sleepless nights worried about Hurricanes and Earthquakes. My heart broke upon hearing of the second Earthquake in Puebla as we had just left Puebla a few days before and almost extended our stay due to canceled flights back to Florida. Even though I no longer have family living in Mexico, our hearts still live and breathe Mexicanidad. Especially when the heart of Mexico is wounded, the capital, we are all wounded as we are all tied thru Mexico from its blood vessels to its heart of the epicenter. 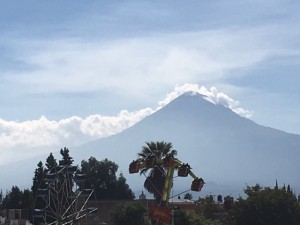 As, I tried to get back to the drumbeat of daily life, I took a walk through a nature preserve with befallen trees all around me. I was trying to make sense of the calamity and destruction that had been caused by mother nature and her wrath. It made me ponder the so-called Mayan prophecy of extinction. When a beautiful Florida scrub Jay perches itself on a branch in front of me. It reminds me of the many times I contemplated being a bird or a cat for the ability to not give a damn, or being invincible to problems with their abilities to fly away from any situation. At that moment I realize that the Scrub Blue Jay had been on the threatened species list, but had made a remarkable comeback and that they are now as common as the sight of a Raven or Squirrel in Florida. How did they survive extinction? By preserving their habitats from being bull dozed by development. By allowing these birds to flourish in their sacred places, their sacred homes. Do we as humans not need sacred places too? Do we not need sacred places, our habitats that are conducive to our survival? In Mayan beliefs and all Indigenous cultures, respecting and living in harmony with Mother Nature is at the core of all their religious beliefs.

Nature, with all of its sacred places, is the center of our spiritual nourishment as all of our spirits are tied to this Earth. As a society we have gotten so removed from the balance of nature that we have dealt death blows to our natural world. Maintaining sacred places is fundamental to our survival as our spiritual well being is nourished from the ashÃ© of all living things: the Sun, the moon, the water, the mountains, from the plants that heal us and bring beauty in our lives. 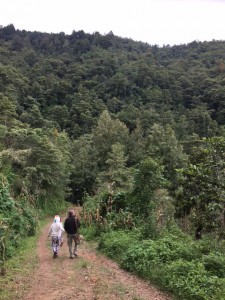