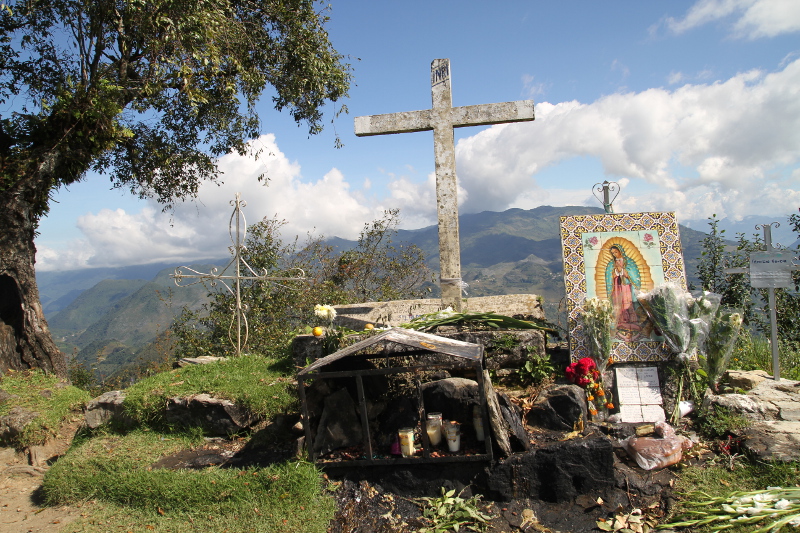 â€œThe more you go inside the world of the Ndi Xti Santo (Little Saint Children), the more things are seen. And you also see our past and our future, which are there together as a single thing already achieved, already happened… I saw stolen horses and buried cities, the existence of which was unknown, and they are going to be brought to light. Millions of things I saw and knew. I knew and saw God: an immense clock that ticks, the spheres that go slowly around and inside the stars, the earth, the entire universe, the day and the night, the cry and the smile, the happiness and the pain. He who knows to the end the secret of the Ndi Xi Santo can even see that infinite clockwork.â€
– Maria Sabina, Mazatec Chota Chjine (Woman of Knowledge)

Shortly before making our trip to Huautla, consulting IfÃ¡ about the trip had yielded the oddun Ojuani Boka. In this path of IfÃ¡, Orunmila had divined for humanity using grains of corn. What I found particularly amazing was that shamans among the Mazatec Indians often divine with corn kernels. In fact, I was first drawn to La SanterÃ­a because while planning a trip to Huautla years before I went to be seen in hopes of gaining insight into the Mazatec corn kernel divination through experiencing what I hoped to be a similar form of divination in SanterÃ­a! The Mazatec Indians had led me to IfÃ¡ and now IfÃ¡ was pointing me back to the Mazatecs.
How the events unfolded was equally amazing. As I mentioned in the last blog entry, soon after we arrived we had made contact with a woman who had agreed to perform a velada ceremony with the Little Saint Children with us… Until she learned we had come from Los Angeles. She had been told by the Little Saint Children during a prior ceremony that people would be arriving from Los Angeles and that she could not do the ceremony for us, but instead must take us to an elder Woman or Man of Knowledge.
The Chota Chjine carefully made three piles of the Ndi Xti Santo (Little Saint Children). When I first saw the huge mound of the Saint Children she intended for me, I was taken aback for an instant. I had read from a number of sources that the Mazatecs never gave outsiders more than a one or two pairs and here there were probably a good twenty pairs â€“ a massive amount even for a Mazateco. But it quickly occurred to me that she too had obviously had been told of our coming by the Saints and had been told what to do, so without question I ate the entire amount given to me in exactly the manner she described.
She began her prayers and songs and in less than an hour I felt I was sinking into the depths and knew I was to have little control over what would follow.
When the Ndi Xti Santo first took me to â€œthe place where everything is known,â€ they explained that they were offering me a rare gift: but I couldn’t withstand the journey as I was: if I wanted to go I must allow them to kill me and have every particle of my being torn apart, but promised me they would ‘rebuild me’ into something greater than I was before. I agreed and after my constituent elements were torn apart, they led me to â€œthe place where everything is knownâ€ where I saw the entirety of the past, the future and the present, from the birth to the end of the universe itself, happening all at once. The immenseness of time and space could be found in a single conscious moment. The universe itself was not only alive but conscious, from the littlest particle to the universe as a whole. And all the wisdom and knowledge of the whole universe was laid bare in front of me. This was the place where the odduns of IfÃ¡ lived! I was experiencing the immensity that is IfÃ¡!
Everything occurring in front of me was also being explained by the Little Saint Children. I knew at that moment why it had been necessary for me to have become initiated as a babalawo and to have received Olofin and OrÃ­ before going to this place.
The Chota Chjine knew what had occurred of course and the Little Saint Children began teaching me some of the Mazatec healing practices what I needed to do to help the Chota Chjine as even the healer needs to be healed.
She began to cry as we saw how the traditions taught to the Mazatecos by the Ndi Xti Santo – that had been kept alive for hundreds if not thousands of years – were being lost due to the lack of people willing to devote their lives to learning them. I assured her, and the Little Saint Children, that the traditions are not dead if there is even one person on earth who keeps them.
At this point the Chota Chjine told Lisa Chango and myself that we had a lot of work in front of us and that since we had been given a priceless gift: knowledge, we must follow the prohibitions including refraining from sexual activity, not for the usual four or five days, but for fifty two days, the same number as the number of years in a century according to the sacred mesoamerican calendar.
I found SanterÃ­a and IfÃ¡ while searching for insight into the Mazatecs, and in turn the Mazatecs gave me a much deeper understanding and appreciation of the knowledge and wisdom that is IfÃ¡. And I am just beginning to fathom just how much the two ways of knowledge complement each other to make a complete whole.